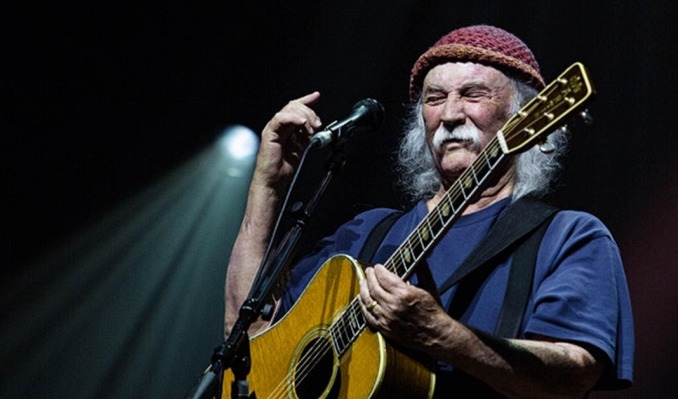 Legendary singer-songwriter and social justice activist David Crosby is a two-time Rock and Roll Hall of Famer, inducted as a member of both the iconic folk-rock band The Byrds — with whom he first rose to stardom — and the iconic Woodstock era-defining group Crosby, Stills & Nash.

A native Californian-and son of an Academy Award-winning cinematographer-Crosby originally intended to be an actor when he moved from Santa Barbara to Los Angeles in 1960. Music prevailed, however, and Crosby began his career as a folksinger, playing clubs and coffeehouses nationwide. Back in L.A. in '63, Crosby formed The Byrds with Roger McGuinn, Chris Hillman, Gene Clark and Michael Clarke, winning widespread recognition for his songwriting and charismatic presence. Driven by hits including "Eight Miles High," "Turn! Turn! Turn!," and a cover of Dylan's "Mr. Tambourine Man," The Byrds' signature electric folk-rock influenced countless musicians to come.

Crosby left The Byrds in 1967 to embark on a lifelong collaboration with Graham Nash and Stephen Stills. Renowned for vocal harmonies, stellar musicianship and timeless songs, Crosby, Stills, & Nash (CSN) have been called "the voice of a generation," and were GRAMMY-honored in 1969 as Best New Artist. The trio's self-titled debut album introduced classics including the Crosby-penned tracks "Guinnevere" and "Wooden Ships"—today, it is included on Rolling Stone's list of the 500 Greatest Albums of All Time. Crosby continues to tour and record with CSN, as well as with Crosby, Stills, Nash & Young, and as a duo with Graham Nash.

As a solo artist, Crosby debuted with the 1971 masterpiece If Only I Could Remember My Name, recently reissued as a two-disc set featuring a 5.1 mix, video footage, and other bonuses. David Crosby also performs and records with CPR, the jazz-flavored trio he formed in 1995 with his son James Raymond and Jeff Pevar.

David's most recent release, Lighthouse is an intimate, stripped-down set that highlights Crosby’s instantly recognizable voice, incisive songwriting, and incomparable guitar work. The palpable joy in the 9-song collection captures the iconic artist in an unexpected burst of inspiration. For Lighthouse, Crosby received an able assist from Michael League, the bandleader/bassist for Snarky Puppy who executive produced and co-wrote much of the album with Crosby. Lighthouse features a rare economy of sound, filled primarily by Crosby’s voice and guitars, and League’s bass. There’s a sparse, unvarnished quality to the tracks that allows the songs breathing room and for the full emotional weight of the lyrics to emerge, unencumbered by extraneous instrumentation.

On album opener, “Things We Do For Love,” written for his wife Jan, Crosby’s vocals reflect a poetic tenderness. On “Paint You A Picture,” a cinematic tale of romantic regret co-written with Marc Cohn (“Walking In Memphis”), they are filled with remorseful resignation. The longtime social activist lands his political punches as he bitingly condemns the craven politicians who send other people’s children to war on “Somebody Other Than You,” and compassionately reminds us that we are all the same on “Look In Their Eyes,” a poignant tale about the Syrian refugee crisis.

Particularly striking on Lighthouse is Crosby’s piquant guitar playing, which is as inventive as always, but never flashy. By turns gentle and caustic, his work here surprised even him as he discovered new tones.

Crosby is also the author of three books including Stand and Be Counted: Making Music, Making History/The Dramatic Story of the Artists and Causes That Changed America, which underscores his commitment to social activism, and belief that artists and musicians are potent agents for change. Crosby's two autobiographical volumes are Long Time Gone and Since Then: How I Survived Everything And Lived To Tell About It. The latter, per Entertainment Weekly, chronicles, "A fascinating life worthy of a sequel."

FacebookOfficial WebsiteTwitter
*Service and handling fees are added to the price of each ticket.
Buy Tickets