She is, simply, one of the greatest voices in the history of rock n roll. Period. For the past 40 years, Ann Wilson has been lead singer for the rock band Heart (35 million records sold), thrilling audiences with her vocal power and her natural gift to wrap her voice around an emotion in a song and lay it at the listener’s feet.  Ann carved out a place for women to dominate a rock stage, and her icon status was cemented when Heart was inducted into the Rock n’Roll Hall of Fame.

CLICK HERE FOR TICKETS TO ANN WILSON at Maryland Hall 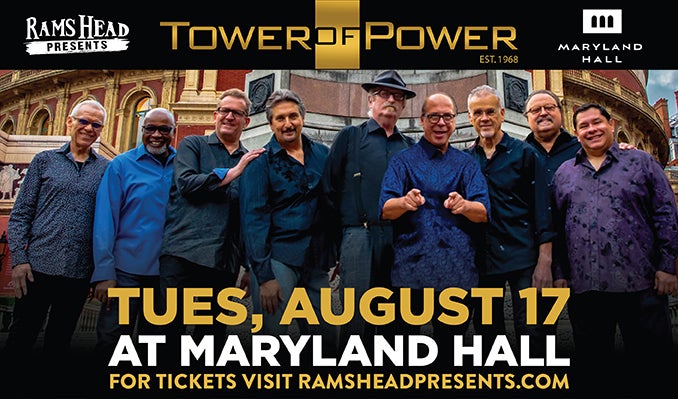 For 50 years, Tower of Power has been creating their own kind of soul music. Since 1968, Tower of Power has delivered their unique brand of music to their fans, appearing before sold out crowds as they tour the world each year. Tower’s sound can be hard to categorize, but the band's leader and founding member, Emilio Castillo, has labeled their sound as "Urban Soul Music."

Tower's rhythm section lays down a groove like no other band. The band’s horn driven sound is unique, and the way they approach everything, from writing and arranging to mixing and performing, is totally their own. Combine all of that with an outstanding lead vocalist and you have one of the most dynamic groups of musicians to ever hit the stage.

CLICK HERE FOR TICKETS TO TOWER OF POWER at Maryland Hall