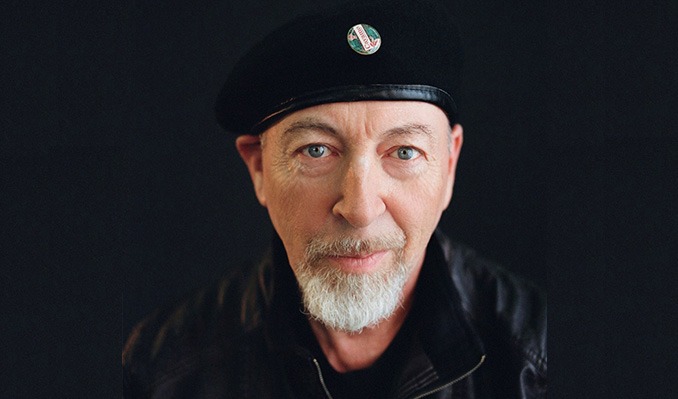 Richard Thompson’s latest album, Electric, produced by Buddy Miller, comes in what is arguably his most creatively productive period in a career that stretches back some 45 years, back to his emergence as a teen guitarist and songwriter with the groundbreaking Fairport Convention— the band that essentially invented the term “English folk- rock.” And that’s saying a lot, with his dozens of albums consistently high on critics polls and guitar skills that have earned him a Top 20 spot on Rolling Stone’s list of Best Guitarists of All Time.

Richard Thompson’s many facets only seem to get more, well, multifaceted.

And multi-fascinating. The recognition continues and has become even stronger in the last few years: his long- acclaimed guitar work—piercing, delicate, often both at once—brought him MOJO magazine’s Les Paul Award; his equally gripping songwriting earned him the 2012 Americana Music Association’s Lifetime Achievement Award, presented to him by Bonnie Raitt, and Britain’s coveted Ivor Novello Award; and he was awarded an honorary doctorate by Aberdeen University in his ancestral Scotland.

Oh, and there was that Order of the British Empire (OBE), bestowed upon him by Queen Elizabeth for service to music, summing up the whole artistic package.

All the while he’s been expanding his roster of accomplishments into theater with his multi-media extravaganza Cabaret of Souls, scoring the gripping Werner Herzog documentary Grizzly Man and curating London’s prestigious Meltdown Festival. Not to mention that he’s an avid birder and hockey fan.

On Thompson’s new album, pointedly titled Electric, all of that is boiled down to its intense essence. Well, maybe not the hockey part—though there is a decidedly full-contact quality to his music and words, as always.

“The title’s Electric, and the music sometimes is,” he says.

Mostly electric, to be accurate, and always electrifying. Whether featuring electric or acoustic guitar, the songs are built around the tightly focused core of Thompson’s current, sharply honed trio: drummer Michael Jerome (Better Than Ezra, John Cale)—who’s anchored his bands for more than a decade—and bassist Taras Prodaniuk (Lucinda Williams, Elvis Costello) complementing and often pushing the leader through a full range of emotional explorations.

The album was produced in Nashville by Buddy Miller (Robert Plant’s Band of Joy, not to mention his own acclaimed albums both solo and with wife Julie Miller) at his cozy home studio. Miller provides rhythm guitar here and there, Stuart Duncan guests on fiddle, Siobhan Maher Kennedy (of the English band River City People) sings harmonies on five of the songs and the incomparable Alison Krauss duets on the achingly lovely “The Snow Goose.”

“It strikes that desirable balance between aggression and reflection that we are always aiming for,” he says, before reflecting, “I wasn’t being too serious with that. But perhaps it does work.”

It works very well, both as a description and as a body of work, a new chapter in his ever-unfolding musical saga.

Thompson terms the Electric material “funk-folk, or folk-funk.” But that is to large extent just a matter of economy—and limitations—of language, something he’s employed to great effect throughout his career both in lyrics and interviews.

“I commented facetiously somewhere that its between Judy Collins and Bootsy Collins,” he notes, wryly.

But as a starting point in getting to know the new music it’s a good description, if for no other reason than it was the starting point of the writing.

“I wrote this record very much with the trio in mind,” he says. “And I thought we could do something that was kind of folk, in an English-Celtic sense, and also funky, in the more ‘70s sense of the word. And I like the idea of sort of a “Celtic power trio.” So that was the idea I was aiming for when I was writing. And I think to some extent it is that.”

It’s very much that on the opening song, “Stoney Ground,” a stomping beat by which to tell the tale of an unashamedly lustful senior citizen. The song, Thompson says, puts him in mind of popular English poet Sir John Betjeman’s “Late-Flowering Lust.”

“People over 55 still have urges,” Thompson notes, cheerily. “I wanted to write a song I could hear [English folk great] Martin Carthy sing. He does songs in that rhythm and tempo really well.”

Is the leering gentleman a hero or a fool?

“Absolutely both. I think he’s a kind of a hero because he doesn’t care what people think about him. He cocks a snoot at society.”

Dichotomy, contrast, complexity, engaging uncertainties flow from there. The lyrical, rueful “Salford Sunday,” with some prickly mandolin touches, sees its conflicted narrator waking up left and lonely in the titular burgh, just outside of Manchester—the same place that inspired Ewan MacColl’s English folk classed “Dirty Old Town.” “My Enemy” features Kennedy’s voice in an almost ghostly shadow of Thompson’s, as he considers inextricable bonds one has with one’s nemesis, or nemeses. And in “Good Things Happen to Bad People,” an attractive melody carries the dark delight of schadenfreude, as the bad person of the title is set up for a inevitable, if perhaps not imminent fall.

“I was thinking of some of those old blues songs: ‘She’s been doing something wrong—I can tell by the way she smells’” he says, quoting his lyrics. “Those very earthy songs of suspected infidelity.”

Electric was recorded in concise, largely live sessions at the Miller abode. Miller’s role, Thompson says, was “to make the coffee—and do everything else brilliantly. He’s such a great musician, and also a great musical associate because he does what’s necessary. His ego isn’t a factor in making decisions. He’ll play rhythm guitar, or nothing. He’ll make the most self-effacing suggestions and also has really good ears. Everything he did was complementary to the project.”

Throughout, the music conveys the subtle shades and wide range of emotions in the songs as compellingly as the lyrics. At times it echoes classic groups with its power-trio instrumentation. Jerome’s drums on “Sally B” (a portrait of a woman of “unbelievable political ambition... so stupid and attractive” that Thompson met at a fundraising event) evoke a bit of the free swing of Mitch Mitchell on the early Jimi Hendrix Experience albums. And the beat leans to the Led Zep thump on “Stuck on a Treadmill.” Then “Straight and Narrow” adds a Farfisa-sounding organ for a garage- rocky touch.

Other times there are strong hints of country’s British folk roots. The yearning “Where’s Home” and the Celtic-country waltz “Saving the Good Stuff for You” spotlight Duncan’s fiddle, while “Another Small Thing in Her Favor,” Thompson says, reminds him of what Robert Burns did with old Scottish melodies.

And “The Snow Goose,” with acoustic fingerpicking and Alison Krauss’s heart-breaking harmonies, finds the narrator everything but free as a bird. Thompson, though, acknowledges that he’ll take a little heat from some of his fellow birders for the choice of said bird.

“I should apologize to listeners in Canada and the U.S. where the snow goose is a more common bird,” he says. “In Britain they are rare. In the lyric it’s pale and rare and footloose. The birding community will say, ‘You could have picked a tundra swan or something, Siberian warbler.’”

Official WebsiteMySpaceFacebook
*Service and handling fees are added to the price of each ticket.
Buy Tickets