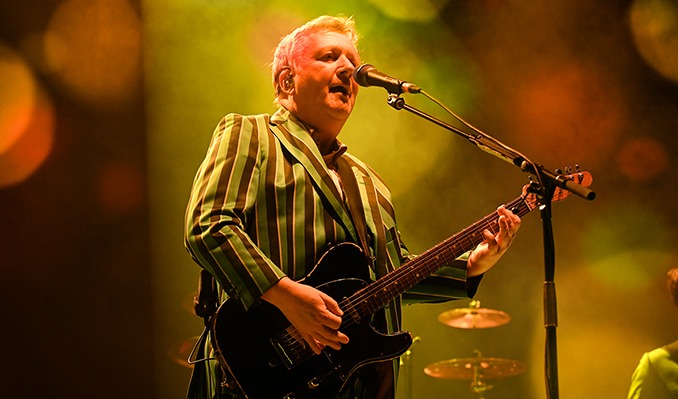 Don’t be fooled by the title of Glenn Tilbrook’s latest album, Happy Ending, or at least not all of it. He’s happy, of course, and why wouldn’t he be? He’s more than earned his place at pop’s top table as one of our most cherished singers, guitarists and songwriters, not to mention an in-demand and endlessly endearing live performer. But more than 40 years after he first answered an ad placed by Chris Difford looking for like-minded sorts to form the band that became the much-loved evergreen Squeeze, an ending is nowhere in sight.

In 2014 alone, in addition to releasing the highly acclaimed Happy Ending (“an unqualified triumph” – Daily Mirror), Glenn is busy treading the boards both at home and away, saddling up with Mr Difford again for a tour of songs and stories under the banner “The At Odds Couple”, and – also in tandem with Chris – writing material for a TV series based on the life of another South London renaissance man, journalist and broadcaster Danny Baker.

“It’ll be just Chris and myself on stage playing songs in quite a different way,” says Glenn. “We’re very different musicians to when we first started out, we’re way ahead of where we were – you could say we’ve actually learned how to play properly! We’ve put in a lot of time rehearsing, and have gone into our catalogue of songs from before we started making records, things people won’t have heard before, and there’s some good stuff in there.

“On record, there’s never really any reason to look back, but live it’s a different perspective. It’s interesting to revisit those songs we wrote between 1974 and ’76; there’s lots of them. It was an incredibly fruitful time for us. There will also be some new stuff, songs that we’ll be recording early next year, which go hand in hand with the Danny Baker TV series.”

The Glenn & Chris connection to Baker stretches back to even before the days of Squeeze.

“I remember meeting Danny for the first time when I was about 17, and Chris actually went to the same school as him. We’re South London contemporaries, so we know what the area was like back then. I read Danny’s book, which is very evocative of that time, and I thought it would be a good idea for us to do something based on it. Of all the vehicles I’ve been looking at for myself and Chris to get involved in, this was the one I thought really had legs. It’s a really exciting project.”

Such is the continuing work ethic of a fellow who’s never been far from the action since Squeeze made their recording bow with the Packet Of Three EP in 1977. Those humble three tracks led to such enduring pop classics as Take Me I’m Yours, Cool For Cats, Up The Junction, Another Nail In My Heart, Tempted, Labelled With Love, Black Coffee In Bed, Hourglass (this could go on for a while...), not to mention landmark albums like Argybargy, East Side Story and Some Fantastic Place.

Squeeze’s demise in 1998 (though not permanent) saw Glenn embark on a solo career that spawned the albums The Incomplete Glenn Tilbrook (2001) and Transatlantic Ping-Pong (2004), showcasing an ever-maturing songwriting talent (his first major works without the input of lyricist Difford) and the formation of his new band The Fluffers. Initially put together as a touring concern, The Fluffers came into their own on Glenn’s next long player, 2009’s Pandemonium Ensues – by which time Squeeze were also back in business, playing sell-out tours across the UK and US.

2011 saw Glenn and Nine Below Zero collaborate on The Co-operative, an inspired mix of original songs co-written with Dennis Greaves, plus instrumental tracks and a few covers, from Johnny Paycheck via Randy Newman to Lennon & McCartney.

Arguably, though, Happy Ending is Glenn’s most personal work to date, a series of evocative portraits of time, people and places, that included writing and vocal contributions by his own children Leon and Wesley, in addition to old friends Simon Hanson (Fluffers/reunited Squeeze drummer) and Dennis Greaves (Nine Below Zero, also Glenn’s compatriot in the side project band The Co-operative).

“I’m really, really vibed up on what I’m doing now,” Glenn says of Happy Ending. “To me, this record takes its place alongside Pandemonium Ensues, East Side Story, Argybargy and Cool For Cats, which are my favourites of all the ones I’ve made. That’s five albums that I’ve thought ‘Yes! I’ve actually done that properly now”...”

Anyone who has witnessed Glenn on the live stage can attest to the properness of his doings, as it were. Armed with ready wit, raucous vibes and a shed load of grin-inducing great songs, there are few musicians able to connect with their audience on such an immediate and warm level. The ever burgeoning festival circuit is frequently enriched by Tilbrook the troubadour, whether he be leafing through his own plentiful back pages or dashing off impromptu audience requests ranging from Jimi Hendrix to Tony Orlando & Dawn, and all points in-between.

“I’ve been doing solo tours for the last 18 years or so, and it’s been great fun. When I started it was becoming clear that the old music business model of record companies was a thing of the past, for me, and it was time to do things under my own steam. And to be honest, I’ve never been happier. You may not have the major sales of the old days, but what you’re doing is so much more gratifying.

“More or less everything I do now is because I want to do it. I’ve always wanted to make music, but there were times when the business side of it got in the way, and I felt removed from what I’d originally set out to do. When you’re involved with a major label it kind of becomes like writing by committee, whereas all the best stuff should be personal, it should be your own voice. Happy Ending is probably the most personal album I’ve ever made, and I’m really, really proud of it.”

Away from the constant and steady stream of fine music, Ivor Novello, Nordoff Robbins, Mojo and PPL awards, landmark plaques commemorating his formative Squeeze years in Greenwich, Glenn is also active in the charity Love Hope Strength, set up by his friend Mike Peters of The Alarm. LHS raises money to set up cancer units in countries in need, and works tirelessly on raising awareness on bone marrow donation. His work with the charity has included record-breaking treks up mounts Everest, Fuji and Kilimanjaro, which should come as no surprise to anyone already in thrall to the man.

Be it mountains or music, Glenn Tilbrook is never very far from the top.