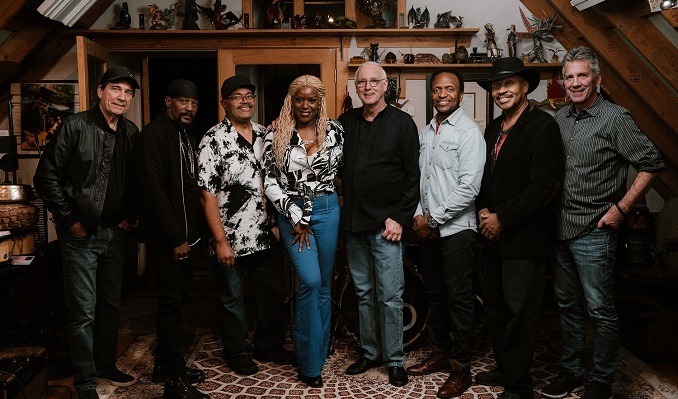 Chambers is an American drummer who has recorded and performed with John Scofield, George Duke, Brecker Brothers, Santana, Parliament/Funkadelic, John McLaughlin, Niacin, Mike Stern, CAB, Greg Howe, and many others. He was inducted into the Modern Drummer Hall of Fame in 2001. Despite a lack of formal training, Chambers has become famous among drummers for his special techniques and speed. Chambers is particularly regarded for his ability to play "in the pocket." He has helped many young drummers, the most prominent being Tony Royster, Jr. Chambers began drumming at the age of four, and was gigging in Baltimore-area nightclubs by the age of six.

A skilled architect of rhythm, Greg Grainger is surprisingly fresh in his artistry and musical perspective. Upon hearing him, it is easy to see why Whitney Houston signed him for her 1988 world tour, why Britain’s Rhythm Magazine called his work “solid and tasteful” dubbing him a “rhythm master” and why he is the drummer for international jazz artists such as Acoustic Alchemy and Kim Waters. Along with being a highly skilled drummer and teacher, he was the Musical Director for Maysa (the voice of Incognito’s Deep Waters and A Shade of Blue). In addition, at the age of 14, Greg was awarded a scholarship to the highly respected Peabody Conservatory of Music at Johns Hopkins University.

Ju Ju House is a legendary DC Go-Go drummer who has his roots with Roberta Flack, “Slave To The Rhythm” with Trevor Horn, The Chuck Brown Band and EU (Experience Unlimited). His most known recording is the EU hit, “Da Butt.” In addition to his deep rhythm talents, Ju Ju has been writing and producing grooves for Eightlock.

Gary Grainger’s seamless approach to virtually any style of music makes him one of the most sought after bass players in the world. He has performed and done thousands of recordings, tours and TV appearances with such notable artists as John Scofield, Dennis Chambers, Nancy Wilson, Nelson Rangel, George Duke, Maysa, Ken Navaro, Acoustic Alchemy, Eric Marienthal and Bill Evans.

Mia has a beautiful multifaceted voice that got its start in church gospel at a very young age. After two recording sessions, she was hired by the band. - “A Must Hear”!

One of the most gifted guitarists on the Washington D.C. music scene, Mike’s bluesy playing has been a draw to area audiences for decades. Well known for his work with the Mary Ann Redmond Band, he now performs with Paul Reed Smith Music in the studio, at concerts, tradeshows and PRS guitar clinics across the country and overseas while still lending his talents to freelance projects and doing studio work for both the Discovery Channel and National Geographic. He regularly performs with high caliber artists including Carlos Santana, David Grissom, and Davy Knowles.

The newest Band member, Bill played in a number of St. Louis bands before embarking on a decades-long journey that has culminated in his being named Director of the Sidney Kimmel Miathem as a guest artist in cancer benefit shows.

Smith is an internationally known guitar maker, musician and guitar player. In addition to performing and recording with his own band, Paul has played with artists such as Santana, Alter Bridge and the Doobie Brothers. He was honored by Vintage Guitar Magazine as a Hall of Fame inductee 2011 and was named Maryland’s Small Business Owner Person of the Year in 2002.